The world of interconnected devices - Internet of Things (IoT) 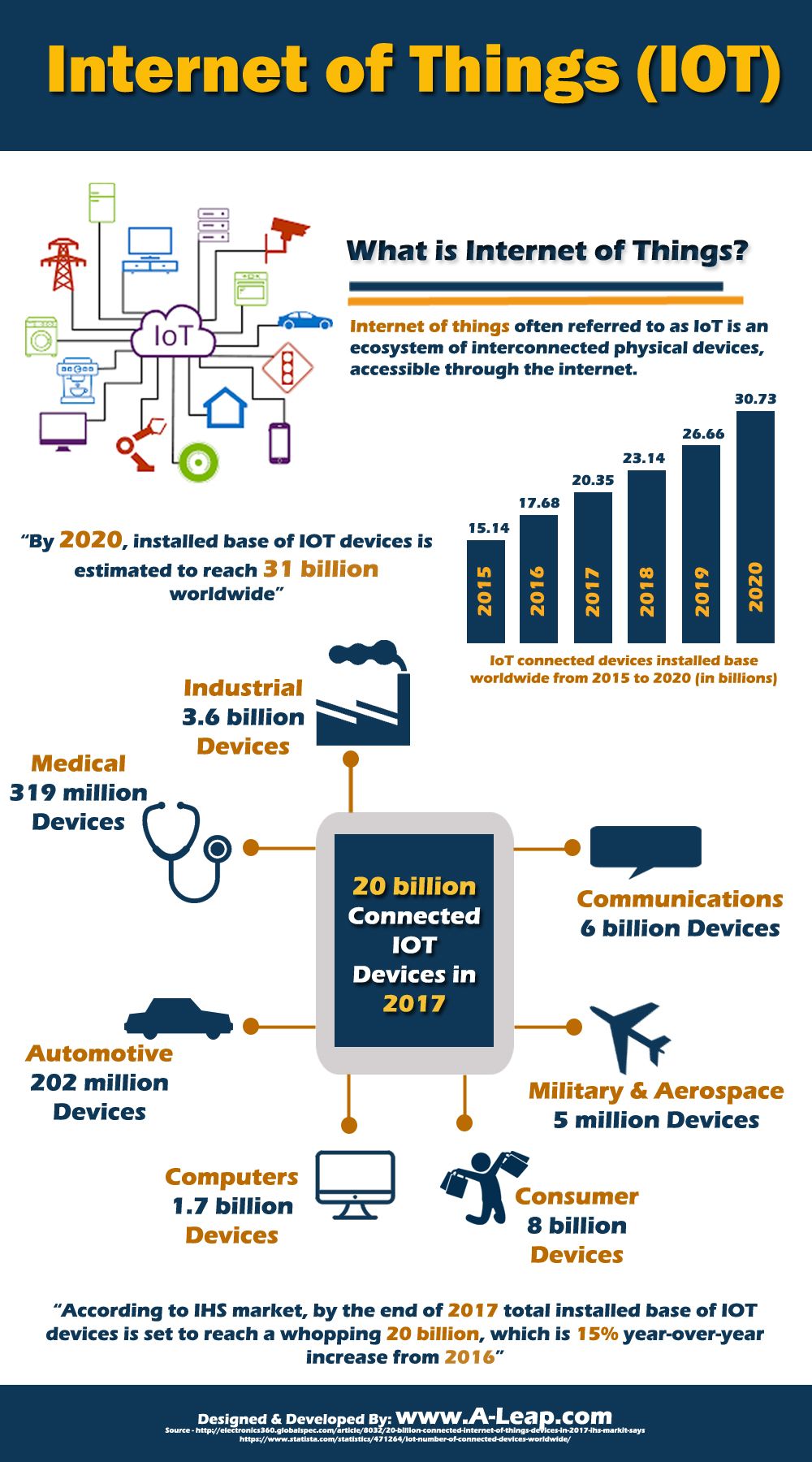 One connection creates another connection. 18 Years back, when just 4 per cent of the world’s total population was available online, the term Internet of Things was coined. Today, 49 per cent of the world’s population is not only available online but is interconnected online and it can be estimated that worldwide, there are approximately 8.4 billion things connected to each other through the internet. This very concept of inter-connectivity through the Internet of things, is the reason that results to the fact that the value of a connected life is comparatively very stronger for a large number of people as compared to the people willing to stay disconnected.What is Internet of things?

Internet of things, often referred to as IoT, is an ecosystem of interconnected physical devices, accessible through the internet. In the term IoT, the ‘thing’ can be anything ranging from a person monitoring his health through some health-monitoring device to a car integrated with some built-in sensors. Basically, anything that has got an IP address and has the ability for data transmission over a network in the absence of any manual intervention is the ‘thing’ mentioned in IoT.  The technologies embedded in these devices assist them in interacting with the other device or any physical thing.

IoT is blooming. Every moment the expansion in the number of interconnected things almost remains unnoticed by the public- actuators, sensors and many other articles that support in the completion of different behind the scene day-to-day operational business tasks. Most of them are abetted by machine-to-machine computation i.e. communication enhanced by artificial intelligence.

Interconnected devices in the world of IoT

One of the most interesting things about IoT is that it has nothing to do about things. It can be simply referred to as a developing technological marvel. As per the estimations, globally 50 to 100 billion devices will be interconnected through the internet by the year 2020.  At the core of the innovation behind the concept of IoT unfolding across all the geographies, connectivity between people is most visible as compared to industrial and technological boundaries. Human beings are lying at the centre, using the applications and services being enabled by the technologically advanced devices and their integration provided the objects in the Internet of things. The technologists round the globe are working since years in order to build huge networking infrastructure to serve the purpose of expansion of pervasive connectivity worldwide. As a result, more and more people are getting connected through connectivity between devices and henceforth the lives of people are improving globally.

IoT can interconnect multiple devices embedded in different systems to the internet. When they can be represented by devices digitally, their access can be gained by anyone located anywhere. The connectivity between the devices then allows capturing substantially more amount of data from different devices at different locations, which in turn provided more options for increasing the efficiency and improving the security of IoT. Being a transformational force, IoT allows the organisations to enhance their performance in order to deliver best results through IoT analysis and IoT security.
Today, it is being envisioned worldwide that the devices owned by people belonging to the smallest towns, smart cities, and different nations or categorized on many other bases are connected ubiquitously and IoT is one common platform on which the notion of interconnected devices is predicated. Businesses like oil and gas, marketing, manufacturing, insurance, transportation, retail and infrastructure alongside utility businesses can reap exponential benefits of Internet of things through the facility of being more informed, and taking right decisions, which is aided by the torrent of transactional and interactional data available at their disposal.

Why Internet of things?

In the year 1999, a published article stated that “If computers would have known everything that has to be known with the usage of gathered data without any manual help, racking and counting of everything would have been possible, which in turn would have helped any enterprise reduce the overall cost, time and loss. Enterprises would easily gather information about when things require replacement, recalling or repairing. The computers need empowerment for the ability to gather information on their own in order to be able to see, smell and hear the entire world for themselves.”Today, this is exactly what the IoT platforms are doing for us. They enable the devices to observe and assess identify any opportunity or the environment in the absence of any dependency on human help.
IoT intends to collect data, predictive analytics, smart networking and deep optimisation across the interconnected devices, IT platforms, people and every possible type of physical object worldwide. Leveraging capability to actuators, sensors, big data, micro-controllers, mobile communications, Internet of Things allows derivation of maximum amount of useful information from all available interconnected elements. Across industrial Internet, transportation, healthcare, energy and almost all other existing industries, the implications of the development of a concept like IoT are quite sweeping. It has the potential to let new technology spaces, business models and IT applications emerge.

Select a course first to display its contents.

No available contents for

There are no free, paid or coming soon courses in your school yet.
Why don't you create one?

The school owner is working hard preparing the courses for you.

Oops, you haven't created any courses yet.

Wouldn't it be a good idea to create a course?

No blog posts found in your blog. Why don't you create one?